The NK Little League is a great fun event where players from all over the Netherlands play against each other in regional teams. It is a great experience for the players. It gives them the opportunity to make new friends and play with and against the best baseball players in the Netherlands in their age group. If the NK is won then even the prospect of an EC and possibly a World Cup in America. More information can be found at www.nklittleleague.nl

Players are classified based on their place of residence. Veldhoven falls in region 3, this region consists of the triangle, Nijmegen, Eindhoven and Maastricht. The organization in this region is done by the South East Sharks. This organization is not tied to a club, but consists of a number of baseball coaches and parents of several clubs in the region. It would be nice if players from your club would participate again this year.

Previous Story:
Become a free sponsor of All In! 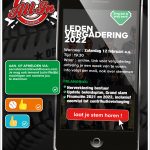